About the Exeter Book

The Exeter Book is a 10th-century anthology of poetry in Old English and is the foundation volume of Exeter Cathedral Library. It is of the greatest importance not only to the UK but internationally: in 2016, UNESCO added the manuscript to its Memory of the World Register of artefacts of global cultural significance.

The anthology (Exeter Dean and Chapter Manuscript 3501) was written down by a single scribe – no doubt a monk – in about 970. Most surviving Old English texts are in prose (the Anglo-Saxon Chronicle, for example) and there are only four known poetic manuscripts: the Beowulf manuscript in the British Library, the Junius manuscript in Oxford, the Vercelli Book in Italy, and the Exeter Book. There is no duplication of contents between the four codices. Though incomplete and damaged in a few places, the Exeter Book is the largest, the best preserved and probably the earliest of them – the oldest book of English literature in the world, of incalculable value.

Having been donated to the cathedral by its first bishop, Leofric (d.1072), the manuscript has been in Exeter since at least the 11th century and has been kept and cared for in the Cathedral Library ever since that time. It contains some 40 poems – predominantly Christian in outlook though a few originate from the period before the conversion of the Anglo-Saxons to Christianity – and nearly 100 poetic riddles. Elegies such as the Wanderer and the Seafarer are among the best known of its varied contents and have inspired writers from Ezra Pound to JRR Tolkien. The riddles (a few of which have bawdy double meanings) are virtually all those which survive in Old English.

The Book bears the marks of its past and appears to have been put to unlikely uses over the years – as a press for gold and silver leaf, a cutting board and a glue stand.

The Exeter Book is a cultural artefact that matters to us all – in the city, the region, and the wider world – and by means of the Exeter Book Project the Cathedral and the University of Exeter are determined to make it accessible for all, using the latest technology and with the shared aim of curating our cultural heritage for today and the long-term future. 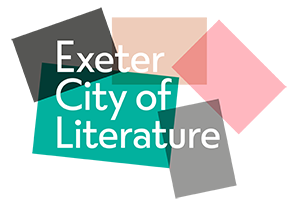 Exeter was designated a UNESCO City of Literature in 2019, and is one of just 39 Cities of Literature across the world. The Exeter Book, itself granted UNESCO status as one of the world's principal cultural artefacts, is a key example of the city’s rich literary history. The Exeter Book continues to provide inspiration in this City of Literature, including to a number of our friends and partners, such as Spork!, author Philip Reeve, and Double Elephant Print Workshop. More of the region's literary heritage can be seen here.

This complete digital copy of the Exeter Book allows its 123 written leaves to be viewed in exceptionally high resolution by readers, enabling them to see in close-up how the parchment of this ancient book was made from different animal skins, home in on individual letter forms (including runes), corrections, editorial additions and the uninked drypoint images inscribed on some of the leaves, in addition to appreciating the poems in context by means of single and double page openings. The site guides users through the world of the Exeter Book, the rich variety of themes treated in the array of poems and riddles which tell us so much about the outlook of the Anglo Saxons, their knowledge of the world, the strange lands beyond their own shores, their values, religious beliefs and even their (often edgy) sense of humour.

In creating these resources, the project team have drawn on the expertise of a wide range of researchers in literature and history from Exeter and its partner universities as well as the digital specialists based in the University’s Digital Humanities Lab.